Northern Ireland's chief scientific adviser has said he is very concerned at stalled vaccine rates. Almost 82% had received a first dose of the jab c

Professor Ian Young said he was “very concerned” about the uptake of vaccination.

“There’s still around 18% of adults who have not come forward for the first dose of their vaccine,” he told the BBC.

“And that means 18% of people who are just as susceptible to the most severe effects of Covid as they were earlier in the epidemic and at just the same risk of severe illness, long-term illness in the form of long Covid, hospital admission and death.”

He urged those who have yet to come forward for their jab to “think really hard” about taking up the opportunity.

NI chief medical officer Dr Michael McBride said overall the roll out of the vaccine programme has been a “huge success”, describing reaching 82% from a “standing start” in December as a “remarkable achievement”.

“Vaccination is our way out of this pandemic, unfortunately over the past number of weeks we have seen the number of people presenting to get the first dose of the vaccine slow very significantly particularly in the younger age groups,” he said.

Dr McBride said there is work to do to understand hesitancy.

He urged people “don’t believe what you’re reading sometimes on social media, on Facebook, or Instagram around these vaccines”. 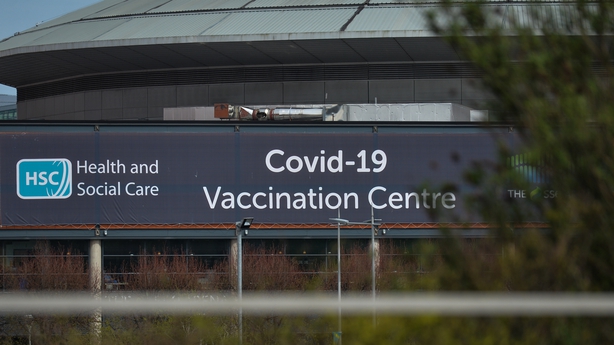 “These are safe and effective vaccine, and I would just appeal to all young people to take up the opportunity to get the jab,” he said.

“They won’t be as accessible in the future, our first doses of the vaccines will end on July 31 at mass vaccination centres and we will begin to stand those down in August so it’s going to become more difficult to access the vaccine although we will still be rolling it out to people who change their mind belatedly.”

More than 1,700 new cases of the virus were notified in Northern Ireland yesterday.

Modelling by the department of health suggests that by mid August there could be 3,000-4,000 cases of the virus a day, with a worst case scenario of up to 8,000 cases a day which could translate to 400-600 in hospital with Covid and in the worst case scenario, over a thousand.

Dr McBride said those figures could be reduced by 50% if 5% more people are vaccinated with their first doses.

“Small percentage changes make a big difference in terms of the pressures on our health service,” adding that Northern Ireland is now unlikely to achieve the 90% vaccinated target.

He said at the peak of this wave it is possible that some scheduled and planned treatments may have to be delayed as happened in previous waves.

“Obviously that will be a last resort but we have to be realistic, the best way to ensure our health service remains open for business, treating people who need access to care is to keep the number of cases in the community down so that we limit the knock on pressures into our hospitals,” he said.

The chief medical officer said it should be recognised that health care staff have been under a huge amount of pressure and there is a “finite capacity in our health care system”.

Prof Young said the Stormont Executive would be facing “difficult decisions” on Thursday when ministers meet to consider whether to approve the latest round of relaxations in Northern Ireland.

He said ministers would need to find a “balance” between the health data on the pandemic and the economic and societal harm caused by restrictions.

On face masks, the chief scientific adviser said he would continue to support their use, particularly in indoor settings.
“There’s a very strong case for continuing to recommend face coverings in indoor settings where people can’t socially distance and settings which are not well ventilated,” Prof Young added.

COVID-19 Vaccine and Pain Relievers: What to Know 0

Study shows that mortality is associated with vision impairment 0

Amazons Ring has teamed up with over 2,000 police and fire departments – Engadget 0

Back to live (carefully…) 0