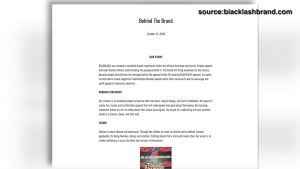 The owner of the clothing line, Quintaya Forchion tells us, Blacklash is inspired by the black community to overcome adversity, break stereotypes and stigmas. She says with all the controversy over the past year, she wanted to make a statement.

Forchion adds, the black community must come together to address the social injustices. As a small business owner, she sees herself as a role model to break out of the idea that those in the black community can’t be successful. “I wanted it to be not only for the black community, but I wanted people to know it is inspired by the black community and that we can own our own businesses and do our own thing as well and be successful at it,” says Forchion. “So the fact that I created this is really exciting for me because I’m doing something that I love and that I’m passionate about and it doesn’t feel like I’m working, it feels like I’m just pushing a message.”

Forchion also tells us, she hopes to continue expanding her brand and more importantly, pushing her message.

You can learn more about her brand and her message by clicking here.

Can a VPN Make Your Internet Connection Faster? 0

Capacity levels are going up at Walt Disney World 0

The Golden Gate: A bridge linking Vegas’ past and present 0